They will be pouring our Peche for this fest. Tickets are still on sale! 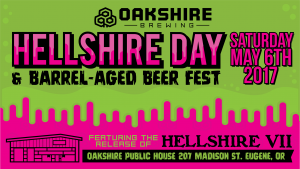 Revel in the beauty of Hellshire VII and other rare barrel-aged beers from across the country at 2017 Hellshire Day & Barrel-Aged Beer Festival!

Our annual celebration of the intangible magic that happens inside the barrel is one the highlights of our year at Oakshire. Not only do we get to share Hellshire VII for the first time and other special barrel-aged beers from our own library, but we also offer 40+ rare barrel-aged beers from across the country. Many of our guest breweries are otherwise not available for sale in Oregon, which makes this a festival not be be missed!

And don’t forget about Hellshire Experience! For a limited number of early registrants, we are offering: Friday night behind-the-scenes warehouse party and brewer meet-and-greet, live music, and complimentary food; a bottle of our extremely rare Double Barrel Hellshire Especial; and, early VIP entry to Hellshire Day to be first in line for the most sought after offerings.

Festival Tickets: These tickets are for those who wish to drink the special beers served as part of the festival; ticket includes a festival glass, 5 tokens, and a wristband that allows them to be served the special beers.