They will be serving our 804 Pils made with all local ingredients including Mecca Grade Estate Malt, Crosby Hops, and Imperial Organic Yeast. 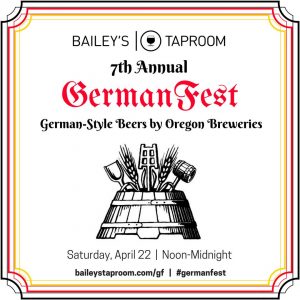 Join us Saturday April, 22 as we continue celebrating “10 Years with Bailey’s Taproom” with our 7th Annual GermanFest 2017. We’ll have plenty of taps flowing with Oregon-brewed German styles, ranging from Alt to Weiss and everything in between. Admission is free and the event will be rocking from noon to midnight! Draft list forthcoming. We hope to see you there!

About GermanFest:
Seven years ago, Bailey’s Taproom debuted GermanFest. It was the last addition to our quarterly Fest schedule which included CellarFest, BelgianFest, & the Barrel-Aged-Beer-featuring AnniversaryFest. At the time, most craft beer drinkers were rebelling against anything yellow & fizzy.

Thankfully, the Oregon breweries we asked to participate blew our minds when we learned about the amount of research they did to find styles that up to that point, nobody in this region had really dared to touch. Gratzer, Roggenbier, & Schwarzbier are just a few examples of the styles we were unfamiliar with when we started GermanFest, but these brewers opened our eyes to the forgotten beers of Bavaria’s past. The world of German beer outside of Hefeweizen & Pilsner was vast and with the help of local brewers, we began our journey into Deutschland beer discovery.

The German bier revolution is a lesson in drinkability, balance, and subtle nuances. Kolsch, Gose, & Berliner Weisse are now staples of many modern American breweries and even some of our nation’s largest contributors are cooking up these styles just as often as their flagship IPAs. Thus, We’re happy to bring back GermanFest for the seventh year in a row. Prost!